If you haven’t heard that Kylie Minogue, pop-sensation, ultra-glam superstar and cultural icon, has released a new album then you must be living under a rock! Kylie has been a force to be reckoned with in the entertainment industry for over three decades; she has the power to sell-out stadiums and demand media attention wherever she goes. With her 14th studio album being released in April, music-platform Spotify honoured Kylie’s lasting influence with a special intimate gig for her die-hard fans, in a venue as glamorous and celebrated as Kylie herself; enter Porchester Hall. 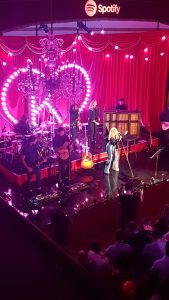 After all, just like Kylie is a jewel in the hearts of the nation, Porchester Hall is the jewel in Everyone Active’s portfolio. From hosting up-and-coming local acts to the likes of Ed Sheeran and Pink Floyd, the unique gig space has played host to hundreds of memorable music events. It is for this reason that Porchester Hall made the perfect, art-deco backdrop to Kylie’s ‘Golden’ gig.

On the 22nd March, Kylie played her new pop and country music tracks to 300 of her closest fans, giving them a sneak-peak to listen to her fantastic new tracks, such as ‘Golden’, ‘One Last Kiss’ and the encore hit ‘Dancing’. Kylie’s infectious and upbeat personality had gig-goers and staff alike dancing along her performances. Two members of the Everyone Events team who were lucky to be at the venue, have told us what they thought about the event:

Abi Idowu, Events Manager: “When we got the news that Kylie was going to be performing at Porchester Hall, I was blown away! She is well-known for being a mesmerising and talented performer and the whole events team felt honoured that she would be at our venue. At the event, she did more than just ‘wow the crowd’, the excitement was through the roof, and the devoted fans joined in word for word. With shimmering glitter rain coming out during the performance, and a huge pink ‘K’ lit up on the stage, it added an extra sparkle and euphoria that kept the fans singing and dancing. The atmosphere and production was just as beautiful as Kylie, and it kept the crowd drawn in. She was energetic and lovely throughout.”

Anja Cvek, Events Duty Manager: “It was so exciting and personally a really unique experience having Kyle’s live concert at Porchester Hall. She was great, she created an energetic atmosphere from the sound check to the live concert and the crowd just loved her. The whole concert was electrifying!” 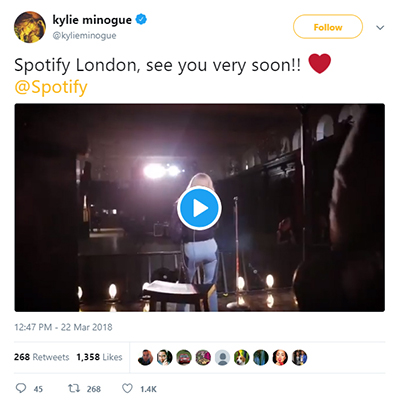 If you want to see what Kylie’s gig at Porchester Hall looked like first-hand, check out her tweet about the event by clicking the video above or here.

Spotify have hosted both Justin Timberlake and Kylie Minogue for these intimate gigs and we wonder who they will pick next! But we hope they choose Porchester Hall again in the future, it’s a fantastic location with great credentials at accommodating first-class artists and their fans.

In addition to the main hall – which seats up to 450 people for a dinner and dance – the venue also features a slightly smaller sister hall which is ideal for small meetings of up to 50 people. There is also the original 1929 swimming pool and Turkish Spa on site, which is in high demand among event organisers and film crews alike. Located in Bayswater, Paddington; Porchester Hall is within walking distance of Royal Oak, Bayswater and Queensway Tube stations.

For more information Porchester Hall and other Everyone Events venues, please visit: https://everyoneevents.com/

We use cookies to give you the best online experience. Please let us know if you agree to all of these cookies.